A Point or Two to Note and File for Further Thought

Another thought is again about comfort - if we find too much comfort in one place, might we be enticed to stay too long?
Posted by Barbi Click at 10:32 AM 1 comment: 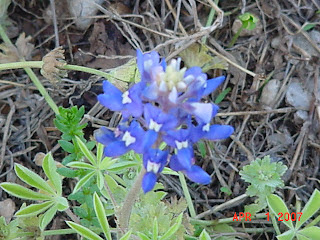 A Bluebonnet in Texas

About the only news of which I have taken note over the past week was the passing of yet one more of Texas' great women. Ladybird Johnson left her Texas home this past Wednesday to rise on to glory. While I am certain that heaven is a better place for her presence, Texas has once again experienced a great sadness.
Lots of people remember Ladybird as the one who began the highway beautification plan. She is the reason that springtime highways in Texas are lined with bluebonnets and paintbrushes. Her ideas laid the groundwork for the lakeside, roadside, shoreline trash cleanups. She planted the seeds that began much of the environmental movement. More than that, she associated the idea that unchecked industrialization and growing urban poverty were partners. Not only did she work to eradicate urban blight within the nation's capitol, she actively promoted and campaigned for the The Wilderness Act if 1964 and the Scenic Rivers Program for the rest of the nation.
Next time you see a bluebonnet, remember her, but also remember that she cared about the entire nation - not about just planting a flower here and there, but about the people within the nation. It goes much deeper than just a pretty picture of little kids sitting in the middle of a field of bluebonnets. It speaks to the heart of the poverty issues.
Posted by Barbi Click at 7:03 AM No comments:

Barbi Click
"Thus am I, a feather on the breath of God." Hildegard of Bingen

I know you know

that everything in this blog is authored or photographed by me (except where noted) and that it is placed on this blog to share with all who will read it. If you want to share, please do so; however, since this is my own writing and pictures, please let it be known that it is mine. I knew you already knew that...but I was told I needed to put it in writing...so here it is!
On another note:
Everything written here is my opinion. It does not reflect the views of any establishment for whom I work, volunteer or paid. It is mine and mine alone.