A Couple of Glorious Things That Have Happened Since March 14 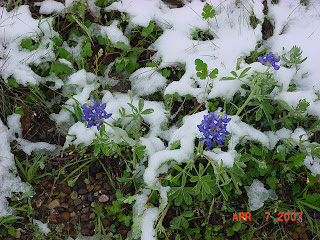 Who would think? Bluebonnets in Snow! In April, no less! 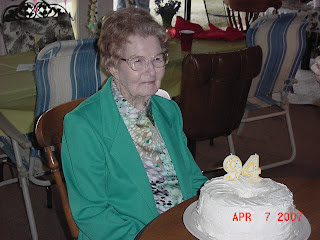 On that same day, April 7th, we celebrated the 94th birthday of my grandmother, Bula Knipe Click - the matriarch of the Click Clan. And yes, that is her own red hair! It was a glorious day, indeed!

Email ThisBlogThis!Share to TwitterShare to FacebookShare to Pinterest
Resurrection of Fear

It has been one month since I last wrote a blog. That gives way to a whole load of thoughts pent up for that while...Gosh, lots of things have happened -Lent is over. Jesus died. Christ is Risen. Alleluia!
Lots of people have died in the past thirty days. We even have a new law in Texas that says it is ok to kill someone who is trying to do you harm. I think that it used to be that you had to yell a warning three times and that the perpetrator had to be fully inside your residence before you shot him (or her). Now you don't have to yell. You don't have to wait until they are inside. The threat can be real or perceived. (at least that it the way it read to me) The possible threat soon turned victim doesn't even have to be exhibiting a weapon. Shoot first and find out facts later. Oh, you mean the guy was just walking past my car to get to his own??? I am so sorry...I thought he was going to attack me.
Ok, so I can see the desire to hurt someone who is trying to hurt you. I can understand the fear that would drive someone to those means. Like an older lady with whom I work - She woke up one night to find a guy standing over her. She carries a gun now. Even the president, God love his little backward thinking mind, in his address to the scarred and scared people at Virginia Tech said that if more people had been properly armed then it would have helped stop the guy that killed and wounded all those people. But somehow, a Law that states you will not be accused of murder or homicide or any other type of crime if you kill someone who you think is trying to hurt you just seems to be a bit twisted.
Ok, so the human in me realizes that it is just basic instinct to want to retaliate, to seek revenge against someone who has hurt you or even scared the living holies out of you. But what is that line, 'Vengence is mine, saith the Lord'? Of course, that is just one of those old lines of text that doesn' t really matter in this modern day, right? yeah...and do we really need more crazy people, stressed out of their minds, reeling from the shock of everyday living running around with 'Glocks' in their pockets? Lord Have Mercy, Christ Have Mercy.
At a place where I volunteer, a couple of guys were talking the day after the attack at VT - they were claiming that this would be the time when those "liberals" would once again try to take away their guns. And of course, you can imagine what at least one said after that...'if they try to take away my guns they are going to have to come in shootin'...'and oh my, let's not forget the disingenuous saying, "When guns are outlawed, only outlaws will have guns."I think that we need to stop and think about the one purpose for which handguns are made...and sorry, honey, it ain't for target practice...
This is Texas, after all. We kill people all the time...even when it would be so much easier and cheaper to just do the simple DNA test to make absolutely, 100% sure that the person on Death Row is truly the person that the State claims he or she is. (I am attempting gender neutrality however the person in these instances is almost always a "he" and almost always Black)
Meanwhile, people are dying - lots of them dying - in Iraq. And no one seems to care. Where is the outrage? Where is the moral outcry? Why are we all just letting it go on? and on? and on?
May God have mercy on us all...
Posted by Barbi Click at 10:56 AM No comments:

Barbi Click
"Thus am I, a feather on the breath of God." Hildegard of Bingen

I know you know

that everything in this blog is authored or photographed by me (except where noted) and that it is placed on this blog to share with all who will read it. If you want to share, please do so; however, since this is my own writing and pictures, please let it be known that it is mine. I knew you already knew that...but I was told I needed to put it in writing...so here it is!
On another note:
Everything written here is my opinion. It does not reflect the views of any establishment for whom I work, volunteer or paid. It is mine and mine alone.